Taking it to the next level 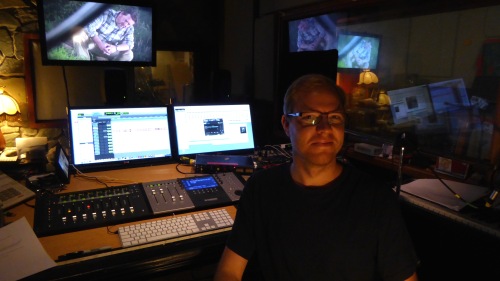 Meanwhile … across town in another darkened room … sound engineer Gareth Van Niekerk is working on another piece of the Every Little Thing jigsaw.

In his edit suite at Northwest Digital in Ellerslie, Gareth is adding the sound effects which – along with the music – will bring the film to life.

“How important is sound? Very. Music and sound design add to the overall feel of the film – taking it to the next level.”

Ironically, though, the audience shouldn’t really be aware of the sound effects he provides. “If it’s a good soundtrack you don’t notice it.”

Usually when a project reaches Gareth, most of the other work – editing, visual effects, colour grading – has been finished. He relishes the opportunity to “help with the storytelling. To bring life into it with the sound of the world.”

Some of the sounds Gareth uses are simply plucked from a sound library. Others, he creates in his Foley suite. (Named after its inventor Jack Foley, this is the room equipped with everything from gravel to china cups, where a Foley ‘artist’ creates everyday sounds like footsteps and hand movements to match the pictures.)

DOGS OUT, INSECTS IN

Every Little Thing brings its own challenges: like removing the ‘echo’ from the actors’ voices (the film was shot in a large warehouse), and taking out the sound of the neighbours’ dogs barking and cars driving past. He also has to create believable sounds for the movement of a beetle and a weta as they scuttle through long grass.

Gareth is tweaking some of the actors’ voices, too. The main character Harry Thorogood is pinned under a car in the middle of nowhere, so Gareth aims to give his dialogue “the sense of isolation. To make it feel as if he’s alone, and you are there with him.”

Gareth has a BSc in computer science from the University of Auckland, and he studied sound engineering at Auckland’s School of Audio Engineering. A decade ago he set up his own company, Northwest Digital. He does film editing and motion graphics as well as the full range of sound work – design, editing, mixing, Foley and ADR (additional dialogue recording/replacement).

His first job was as ‘nightshift sound assistant’ on Spartacus, then he moved on to doing Foley and dialogue editing on that series. This year his big commissions include the Ash vs Evil Dead TV series (editing sound effects), and the NZ-Chinese coproduction The Wonder (for which he is doing the Foley work).

And, of course, the big one! – Every Little Thing.

“The nice thing about Every Little Thing,” says Gareth, “is there’s a lot of space so you can build to the big moments then drop back to nothing.”

And with those words, Gareth is back at his desk and his Protools software, working on a tapestry of sound effects which most of the audience will never notice.

5 responses to “Taking it to the next level”