Strange sound #1: The Musical Saw. We’ve been asked about the ‘musical saw’ which composer Karl Steven (pictured above) played for the Every Little Thing sound track. Yes, it really is a regular saw for cutting wood – but it’s marketed for use as a musical instrument.

The “Sandvikens Stradivarius” is made by a Swedish company. Each year it puts aside a few dozen saws which it thinks will make superior musical sounds. (Importantly perhaps, these are not sharpened!)

Karl was given one by his mother, who is Swedish, and he’s been playing it off and on for three years. “I just love the sound,” says Karl. “It’s so elegant.” He uses a bow (on the straight edge!) and produces different notes by bending the blade. 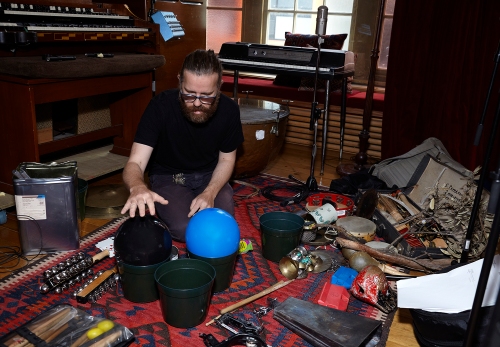 Strange sound #2: The Space Drum. Another strange noise on the Every Little Thing sound track was produced by a ‘space drum’. It’s one of many items among percussionist Chris O’Connor’s fascinating collection.

The ‘drum’ consists of three balloons sitting in plastic flower pots. Chris places a steel plate on top of them to create an unnerving screeching sound. The space drum was invented by Chris’s American friend Tom Nunn.

One response to “STRANGE SOUNDS FOR SHORT FILM”