Worth getting up before dawn! 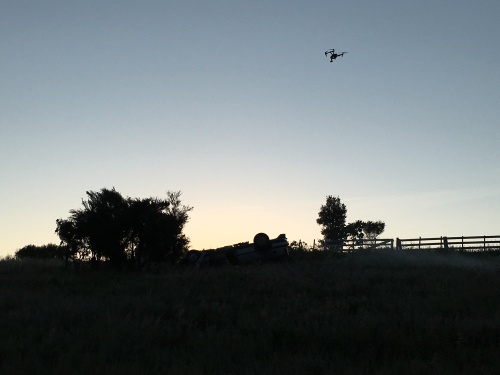 The EveryLittleThing team staggered out of bed before dawn to film an upturned car in the middle of nowhere.

“But it was worth it,” says director John Harris. “Director of photography Fred Renata captured some evocative shots of the car and the silhouetted fence line as the sun came up. And those shots will help make this film look magical.”

The beautiful images also owed a lot to the ELT crew who laid on the car, shrubs, fence, smoke, car lights – and breakfast. And Mother Nature came to the party with a glorious morning.

The photo also reveals Graham Morris’ drone, which flew overhead to get God’s-eye shots of the scene.

EveryLittleThing tells the story of Harry Thorogood, a brash young salesman who is pinned under his crashed car and starts to ‘see things’. Editing begins soon.

3 responses to “Worth getting up before dawn!”